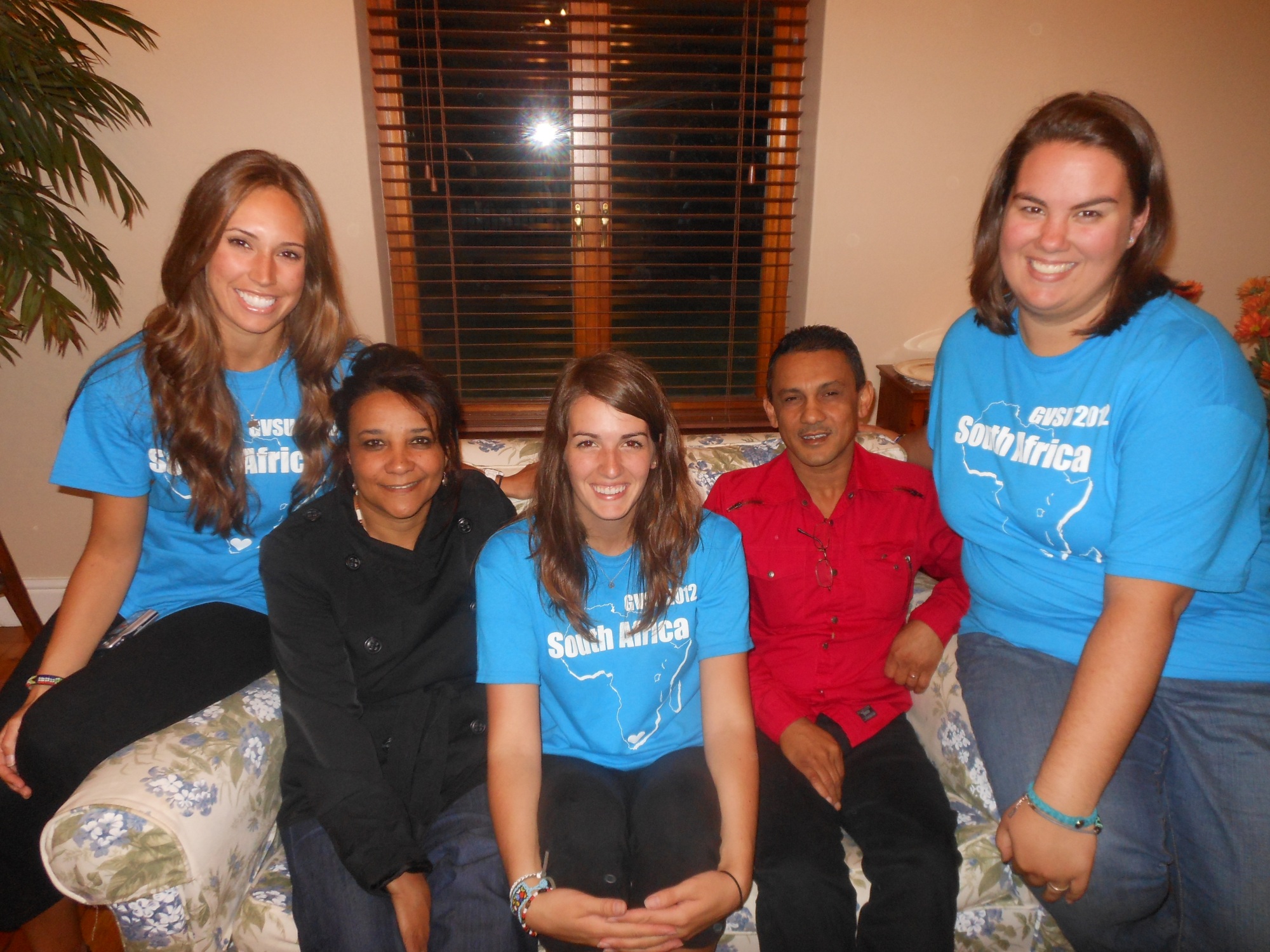 It was after 11pm in South Africa on Sunday March 18th 2012. I was in a foreign place with two friends who I had bonded with during our two day travel, standing in the living room of two complete strangers, strangers that our advisor herself was meeting for the first time. My emotions were running all over the place; scared, excited, and exhausted. I had just traveled from Grand Rapids, Michigan to Amsterdam then down to Cape Town, South Africa and drove into Ida’s Valley for the next six weeks of my life. Jennifer and Lincoln were going to be my parents, Ouma my grandma, Compton and Lyle my brothers and two friends from GVSU my sisters and roommates for the next six weeks. Monday morning was going to be an early one; we had to be at school so all I wanted to do was clean up and get some sleep. We said goodbye to our advisor and our South African liaison, I was now alone with these people. This was a big deal for me, I cried each and every time I went away to summer camp. I cried the day my parents dropped me off at college in 2008. I cried each weekend I had to head back to GVSU my freshman year. But here I was thousands of miles away from home and the only reaction that could be seen on my face was fear. Lincoln said he had never seen somebody so scared, he told me to relax and get some sleep, all would be well.

That was my first night in South Africa, and after many more nights I got use to my host family; Jennifer and Lincoln. We were their first GVSU students and first Americans living in their house. They transformed their lives for us in two short weeks by agreeing to take us in, moving furniture, buying food, and making their schedules available for us at dinnertime and on the weekends. Jenny and Lincoln were eager to learn about us just as much as we were eager to learn about them. Whether we were jamming to Julio Iglesias with the windows rolled down and the South African breeze blowing in our hair or talking about their lives during Apartheid, they let us into their lives and their hearts.

After a week with Jennifer and Lincoln, it was time for my Holiday with all my GVSU friends. As I packed the last couple of things in my bag and walked out to the front door Jennifer, Lincoln, and my roommates were all chatting on the porch sipping coffee. That was the moment I realized how special Jennifer and Lincoln were to my story in South Africa.

The vans pulled up to our house and all our friends were screaming with excitement. Before I joined them, Jennifer and Lincoln showered us with hugs all around and well wishes on our trip, last minute facts on the cape and a final wave to our vans as we pulled off Bakker Street. Two weeks without them was long. We received a couple text messages those weeks from Jennifer saying she missed her girls and was ready for us to come home, but hoped that we were enjoying our time with our friends. I arrived back on Bakker Street on Easter Sunday just before dinner. It was raining but that did not stop Jennifer from coming out to greet us and help carry in our things. Easter dinner we spent sharing stories about our trip to them and sharing about their visitors while we were gone. That night I called home to America, my family was just sitting down for Easter dinner yet I didn’t feel like I was missing out on my favorite holiday with them, I was content in where I was – enjoying a holiday with my other family.

The weeks following my time back “home” with Jennifer and Lincoln flew by. Each night, the six of us spent hours sitting around the dining table. Those hours I realize now were some of the best times I spent with them. We continued to learn more about them, their family, Lincoln’s love for landscapes, cities, and cars and Jennifer’s desire to come to America one day. Jennifer prepared us lunch, did our laundry, and made us feel like her daughters. Each night ended with Lincoln’s coffee (as I call it), and “goodnights” all around. In less than six weeks, I realized how lucky I was to be placed in their home for my time in South Africa.

Our last day, April 29th 2012, was spent at the Saunders home. Our GVSU group had prepared the Farewell Dinner later that evening, but until then we were packed and ready to spend the last couple hours with the ones that I spent every day with. Jennifer took us on a drive up the mountains listening to some of her favorite music and we walked to the neighborhood sign for pictures. I took in each moment: pictures with the family and farewells to Ouma and Lyle.

Before I left Bakker Street for the last time, Jennifer stopped me in the garage and placed a bracelet on my wrist explaining that I was more special than I realized, that she enjoyed each day she spent with me and that she would miss me from each day forward. The bracelet was beaded with the South African flag and on the inside, Lincoln, Jennifer, Lyle, Compton, and Ouma’s names were written. The Saunders and I had to say our good-byes. It was time to head to the airport. Tears began and it was not just from Jennifer but Lincoln as well. He had to excuse himself and Jennifer said he never cries, so that just says how important we are to him.

Weeks after returning to the United States I was sending updates and pictures of my life at home with my family and friends. Each morning that I would wake up to a new email from Jennifer, the smile could not be wiped off my face. Since I have been home Jennifer and Lincoln have been a part of my life beyond what I could have imagined. I have introduced them to my students while student teaching. Jennifer got to Skype call us as we learned about the seven continents. They were the first ones to congratulate me on my college graduation and the first ones to wish me “Happy Birthday.” When any big events happen in my life, they will be one of the first to know about it. A year after my journey to South Africa, my roommates and I got to call Jennifer and Lincoln. It was a bittersweet hour on the phone hearing the voices and the laughter that filled my heart during my six weeks in their country.

That terrified look as I walked into their home was worth it. My host parents were one of a kind. They dropped everything to learn about my friends and me and to teach us about them and their country. A day does not go by when I do not think about them and as I have been told a day does not go by when Lincoln does not talk about “his girls.” That is when I knew that I am one lucky person to have gotten to meet them and experience a host family during my study abroad trip. 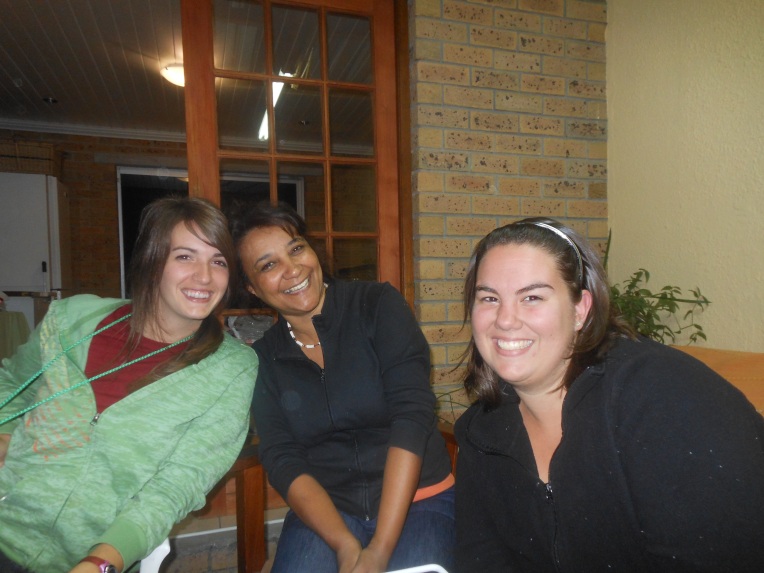