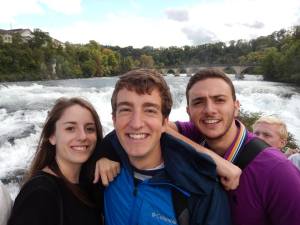 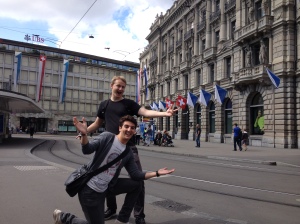 What is your major/minor and year?

Why did you choose to study abroad in Switzerland?

The exchange program in Winterthur, Switzerland, presented a unique opportunity for me. Unlike most students who embark on a journey to a completely foreign country, I had already visited Switzerland, twice in younger years and more recently in the summer of 2013. Having Swiss relatives on my father’s side, some might wonder why I chose such a seemingly familiar country for an exchange experience.

While my grandmother’s Swiss nationality originates from the French-speaking Canton de Vaud, I studied in the Swiss German Kanton Zürich. To the casual tourist, this distinction might seem negligible, but in reality Switzerland possesses a strong cultural diversity despite its small geographic size. This exchange experience was both about new beginnings and furtherance, an opportunity for me to live in an alien environment with novel surroundings and individuals, while still learning more about my family heritage, reuniting with relatives, and exploring more extensively the beautiful country of Switzerland.

Where did you live while you were in Switzerland?

I lived in a housing camp for incoming students in Winterthur, Switzerland, a brief walk from the ZHAW Technikum where I studied. The environment was highly international with fellow exchange students from Switzerland, France, Italy, Poland, Spain, Denmark, Iceland, Finland, Scotland, Russia, Angola, Taiwan, Malaysia, the United States, and more. A fantastic aspect to this living situation was the large, shared kitchen; interaction with neighbors became necessary and exchanged greetings turned into shared meals and international dinners.

What did you learn about the host country or the U.S.A. while you were abroad?

While in Switzerland, I learned that the Swiss are very adept linguistically speaking. Switzerland is a country with four national languages: German, French, Italian and Romansh. From a young age, Swiss children begin learning foreign languages, so they can speak and interact with those who do not speak their native tongue. Swiss citizens can often speak English too, something I learned to appreciate, especially in my coursework.

Sadly, the United States is mostly second language illiterate, myself included. Of course, geography and environment can play a large role in determining whether one is forced to practice and learn another language. A country like Switzerland is in close proximity to other European nations that converse in many different languages, while English remains the dominant language spoken in the United States, one of the largest countries in the world. Still, it is important that we seek out opportunities to communicate and connect with others even if the process is not easy.

Why do you think it is important for students to have international experiences?

It’s important for individuals to step outside of the small corner of the world where they live and learn about how others interact and coexist. This way we can see that there is not necessarily a singular way to live, that there is not one culture that is more correct than others, but rather that there are multiple and many beautiful ways to live and thrive.

Do you think it’s especially important for computing and engineering students to go abroad?

Computing and engineering students often embrace a very practical, economical approach to their studies, preferring to pay the minimal amount for courses by graduating as soon as possible. Therefore, even though studying abroad is often an alluring opportunity, most students in the field quickly lose interest if the coursework does not align. Fortunately, the Padnos College of Engineering and Computing has created opportunities for such students to gain an international experience while still earning credits toward their concentration in studies. Personally, I earned credit for five courses towards my major while studying in Winterthur.

Since I studied at the Zurich University of Applied Sciences, a technical college, the coursework was highly practical and relevant to today’s practices in the business world. It’s awfully important for engineering and computing students to recognize that opportunities like this are made available for them to feasibly pursue. By learning to live and interact in a foreign country, students will be forced to prove their adaptability and agility, valuable traits in the fast-paced field of computing.

Did you do any traveling while you were in Switzerland?

I decided to focus largely on traveling throughout Switzerland, partially because I had already visited London and Paris, but also because I wanted to truly explore the diverse country I was living in for four months. I was fortunate enough to see Zurich, Geneva, Bern, Lausanne, Lucerne, Basel, Lugano, St. Gallen, Engelberg, and more with friends I made while studying in Winterthur. Moreover, I did manage to also visit Munich, Germany, Grenoble, France, and Milan, Italy, during my exchange semester.

What foods did you like best? What did you miss from home?

Swiss chocolate and Swiss cheese fondue are arguably some of the tastiest foods in the world. Birchermüesli, Rösti, and Raclette are less well-known Swiss dishes, but still delectably delicious. You might say it’s hard to miss American meals when you’re spoiled with Swiss cuisine like that.